In Chelle goes on I mentioned: ... in the case of the wine-glass when you strike it, you find out the resonant note of that object, so it is a matter of turning up the volume and they start to break. YouTube: How to Break Glass with your Speakers

Today in the news there was a topic that in Libya lots of land mines are stolen from army depots to be used for 'Blast fishing' ... and actually this type of violent use of explosives is a better example of what I'm trying to explain, that if there is an Aether medium wherein the wave properties of light move, that higher and higher collisions energies, could reach a point where surrounding matter starts to lose its functionality. Here is a YouTube clip: Fishing with Dynamite

"Underwater shock waves produced by the explosion stun the fish and cause their swim bladders to rupture. This rupturing causes an abrupt loss of buoyancy; a small number of fish float to the surface, but most sink to the sea floor. The explosions indiscriminately kill large numbers of fish and other marine organisms in the vicinity and can damage or destroy the physical environment, including extensive damage to coral reefs." http://en.wikipedia.org/wiki/Blast_fishing

I've asked this question on 'physicsforums.com' (link), but the debate got closed as mentioned in an other post (link). Here's the sketch and argument: 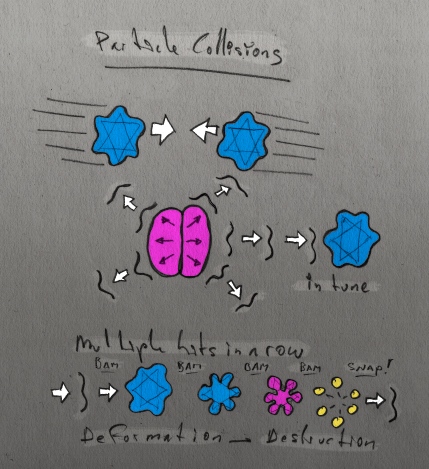 Kasuha wrote:Your argument is based on assumption that universe is made of wood ... and I don't care whether you call this wood 'aether' or anything else.
What you're saying is "if universe is made of wood, it will burn up". Well yes, from strictly logical point of view that statement is true. But that's only because it's based on false assumption.

Let me clarify a few things. I do assume that there is an Aether, lets say that space is full of nutrinos, gravitions, darkmatter, higgsbosons and probably some other stuff ... I think that we can agree that what is presumed to be 'vacuum' isn't so empty. Second, I believe that we can agree that atoms are 'organisms' made out of multiple parts that function together, so there must be a level of fragility, and these critters move within this medium. If I may, I would like to ask you; why is my assumption 'false' if I say that particle collisions might generate vibrations that shake up nearby organisms? Also note that light behaves like a wave and as a particle, a logic explanation would be that the photon generates a wave within the medium, like the rotor of a ship does in water. For the rest I can't make any predictions what it takes to shake an atom apart, due to Heisenberg's Uncertainty Principle, we only know how much energy it takes to smash one to pieces. This is for me the risky part of particle collisions, we might turn up the energy levels until we reach a breaking point, but by doing so we could start off some sort of chain reaction. One argument has been that there is no energy coming out of particle collisions but I find this a bit weak, because of the uncertainty principle, for instance waves can be coming in from the ocean running on to shore and into a pier with increasing energy and nothing happens until a point is reached that things starts to be shaken apart. I can be wrong, but I don't believe that my thought pattern is too far fetched.

by tofanema
If you enjoy fishing, can you tell the difference between native trout and the planter fish? In the good old days, we just fished and could enjoy native trout. We enjoyed fishing at a lake up in the mountains, and the native trout seemed to be a firmer texture. (This is in Oregon) I just wonder if some of you old timers ever noticed the difference. I loved fishing and wish I could go as often as I use to...I really need to get out there and at it again. It is probably one of the most relaxing ways we can spend a vacation...for old timers like me anyway.
All times are UTC
Page 1 of 1
Powered by phpBB® Forum Software © phpBB Limited
https://www.phpbb.com/